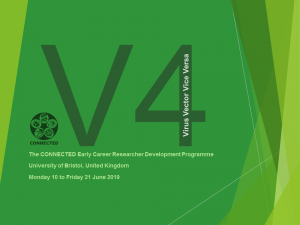 Dozens of early career researchers from Sub-Saharan African countries will attend a ground-breaking two-week training course at the University of Bristol next month. It’s organised by the Bristol-based CONNECTED research network, which works to find ways of tackling plant diseases that devastate African food crops, and which are spread by vectors.

Funding has been made available by CONNECTED for over 30 researchers from 14 different countries to attend ‘V4’ – Virus Vector Vice Versa – a residential course running from 10 – 21 June.

It will have an unusual blend of attendees: plant pathologists and entomologists. Researchers from these disciplines will come together to learn and share insect and plant expertise – fulfilling a core element of the network’s interdisciplinary function, as it seeks to find long-term solutions that will help improve African food security.

University of Bristol’s Professor Gary Foster, CONNECTED Network Director, says: “The purpose of V4 is to help create a cohort of researchers with a joint understanding of virology and entomology. We want to enable them to collaborate effectively on the research challenges of plant vector-borne diseases in Africa for years to come.”

Places at the event were awarded by competitive application, with funding awarded to cover travel, accommodation, subsistence and all training costs of successful applicants. The programme will combine:

The network’s Co-Director, Professor Neil Boonham, from Newcastle University, said: “Plant diseases significantly limit the ability of many countries to produce enough staple and cash crops such as cassava, sweet potato, maize and yam. The CONNECTED project focuses on addressing their spread by vectors – insects that transmit a disease from one plant to another.”

‘V4’ follows a hugely-successful five-day training event run in Nairobi, Kenya, by CONNECTED in association with Biosciences eastern and central Africa – International Livestock Research Institute (BecA – ILRI) Hub which enabled 19 delegates from 10 countries to take up fully-funded places at ‘An introduction to virus and vector diagnostics’.

Network team members, Dr Diane Hird and Richard Wyatt, based at the University of Bristol School of Biological Sciences, attended the training, with Diane assisting with lab work and Richard collaborating with a local film-maker to produce a short movie about the course, which can be viewed here.

Farmers in Sub-Saharan African countries face failing harvests as a result of vector-borne plant disease, and are often unable to feed their local communities as a result. The diseases can lead to increased poverty, malnutrition and food insecurity. And they block the countries’ economic and social development, sometimes leading to migration as communities look for better lives elsewhere.

The CONNECTED network project is funded by a £2 million grant from the UK government’s Global Challenges Research Fund, which supports research on global issues that affect developing countries. It is co-ordinated by Prof. Foster from the University of Bristol School of Biological Sciences, long recognised as world-leading in plant virology and vector-transmitted diseases, with Professor Neil Boonham, from Newcastle University its Co-Director. The funding is being used to build a sustainable network of scientists and researchers to address the challenges. The University of Bristol’s Cabot Institute, of which Professor Foster is a member, also provides input and expertise.