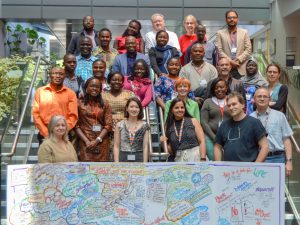 Hundreds of researchers working on crop diseases carried by insect vectors in Sub-Saharan African countries will have their knowledge and skills improved as a result of a ground-breaking training course run by the UK government-funded CONNECTED network.

A group of early career researchers from 11 African countries took up fully-funded places at the V4 (Virus-Vector Vice-Versa) Development Programme in June 2019, held at The University of Bristol, UK.

Determined to find new solutions to plant diseases that threaten food security, CONNECTED used the training to draw together an unusual blend of researchers: plant virologists and entomologists.

At the end of the two-week event, those who attended were asked about their intention to share what they had learned with others in their professional networks, and how many people this would involve. Delegates confirmed they would share information with hundreds of colleagues in a variety of means, with overall feedback showing the dissemination is now taking place to a minimum of 400 people in countries across Africa.

Those who attended are now undertaking laboratory practical sessions, seminars and tutorials, lectures, and research supervision in their home countries to share the skills they acquired. Others are penning articles and newsletters, and using other means to spread the knowledge still further. 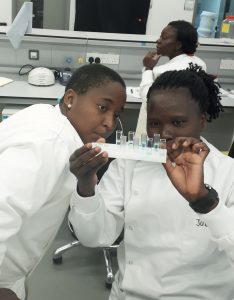 Findings from delegate feedback also included:
• 94 per cent of delegates said the new knowledge and skills they acquired during V4 will improve the quality of their research ‘a lot’ (the highest possible rating)
• 82 per cent gave the highest possible rating when asked about the relevance of the training to their own professional development
• 94 per cent will strongly recommend a CONNECTED training course to others.

“The V4 Development Programme formed a key part of the CONNECTED network’s formation of new collaborations to address food security challenges in Sub-Saharan Africa. It’s very exciting to consider the potential impact that delegates’ sharing of knowledge and skills will have on improving crop yields.

“CONNECTED is sowing the seeds of a new generation of collaborators, whose work will transform African agriculture for the next 20 – 30 years.”

With an overall focus of collaboration, it was fitting that the event itself drew together expertise from a number of individuals and organisations, including: 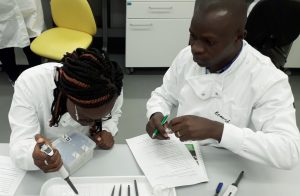 Plant diseases significantly limit the ability of many of Sub-Saharan African countries to produce enough staple crops such as cassava, sweet potato, maize and yam. Farmers face failing harvests and are often unable to feed their local communities as a result. The diseases ultimately hinder the countries’ economic and social development, sometimes leading to migration as communities look for better lives elsewhere.

The CONNECTED network project is funded by a £2 million grant from the UK government’s Global Challenges Research Fund, which supports research on global issues that affect developing countries. It is co-ordinated by Prof. Gary Foster from the University of Bristol School of Biological Sciences, long recognised as world-leading in plant virology and vector-transmitted diseases, with Professor Neil Boonham, from Newcastle University its Co-Director. The funding is being used to build a sustainable network of scientists and researchers to address these challenges. The University of Bristol’s Cabot Institute, of which Prof. Foster is a member, also provides input and expertise.