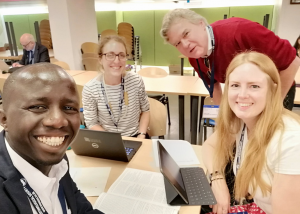 ‘International collaboration’ was the theme of a workshop run by The CONNECTED Virus Network at ‘Ento 19’, the International Symposium & Annual National Science Meeting of The Royal Entomological Society in London, UK.

Three researchers working on projects which have been pump-prime funded by CONNECTED made presentations at the August 2019 meeting, explaining the way they are forging international research collaborations in the battle against vector-borne plant disease in Sub-Saharan Africa. 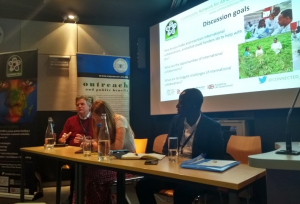 Their presentations gave practical perspectives and experiences in setting up and running international collaborations in vector-borne plant disease research.

Below you can read more information about the three speakers, and the abstracts from their presentations.

Abstract: Production of maize, the main staple food in Eastern Africa region, is under threat due to Maize lethal necrosis (MLN) disease, a result of a synergistic interaction between Maize chlorotic mottle virus (MCMV) and any of the maize-infecting potyviruses such as Sugarcane mosaic virus (SCMV). It has been established that MCMV is a new entry to the region and the main driver of MLN disease, and that effective control should target this virus and/or its vectors. A number of vectors associated with the transmission of MCMV have been reported based on studies undertaken from outside of Africa, notably the US and China. These species have largely been assumed as the main vectors of MCMV operative in Africa, and for which current control recommendations are targeted. However, no systematic studies have been conducted in Kenya and eastern Africa to substantiate this assumption, or if additional vectors are present. The eventual outcome of this study is improved maize yields through targeted control of the main MCMV vectors in E. Africa and hence more effective management of MLN disease.

Dr. Charlotte Nellist is an early-career research scientist, building a research team focused on improving durable disease resistance in horticultural crops in the Genetics, Genomics and Breeding Department at NIAB EMR. Her research utilises our understanding of genetics and molecular plant-pathogen interactions to better understand host resistance to a range of plant pathogens.

Abstract: Roughly two billion people globally are suffering from deficiencies in essential vitamins and minerals, termed “hidden hunger”. A number of countries in sub-Saharan Africa have high levels of hidden hunger, including Kenya which is ranked second worst. Cabbage and kale (Brassica oleracea) are the most important and commonly consumed vegetable crops in Kenya. Turnip mosaic virus (TuMV) is reported to be a major constraint on cultivation and is vectored by over 89 species of aphid in a non-persistent manner. We report the presence of TuMV in field surveys conducted in March 2019. In one region, Molo, the incidence of TuMV in kale was 56%, with some farms having 100% incidence. Potentially durable disease resistance that is undefeated by all TuMV strains tested has been identified in the related crop species, Chinese cabbage (Brassica rapa). The project aims to transfer the retr01-based resistance (Nellist et al., 2014) from the A genome of B. rapa to the C genome of B. oleracea using speed breeding, to provide durable resistance and deliver capacity building in sub-Saharan Africa.
Ref : Nellist CF, Qian W, Jenner CE et al., 2014. The Plant Journal 77: 261-268.

Prof. John Carr is a professor at Cambridge University where he lectures on plant-virus interactions and microbiology. His research is focused on understanding fundamental mechanisms controlling virus-plant-insect interactions and translating these to benefit agriculture.

Abstract: Arthropod-borne viruses are a major and growing threat to crop-based agriculture, particularly in sub-Saharan Africa. Thanks to funding from the GCRF-CONNECTED Network, the Cambridge team is collaborating with colleagues in Kenya, Ghana and Uganda on investigations of a number of important insect-transmitted crop diseases. In Kenya we are working with scientists at the Kenya Agricultural and Livestock Research Organisation to understand the full diversity of viruses causing maize lethal necrosis disease (MLND). MLND is caused by the combined effects of two viruses: an aphid-transmitted potyvirus and a thrips or beetle transmitted maize chlorotic mottle virus. However, a variant of MLND may involve an additional, aphid-transmitted virus. Also in Kenya we are working with scientists at the International Centre of Insect Physiology and Ecology to investigate the potential of aphid-pathogenic viruses as biocontrols. In Uganda, we are investigating the diversity of viruses transmitted to the valuable tomato crop by whitefly and aphid vectors, and in Ghana, seeking to identify the virus responsible for an emerging aphid-transmitted disease of cabbage.