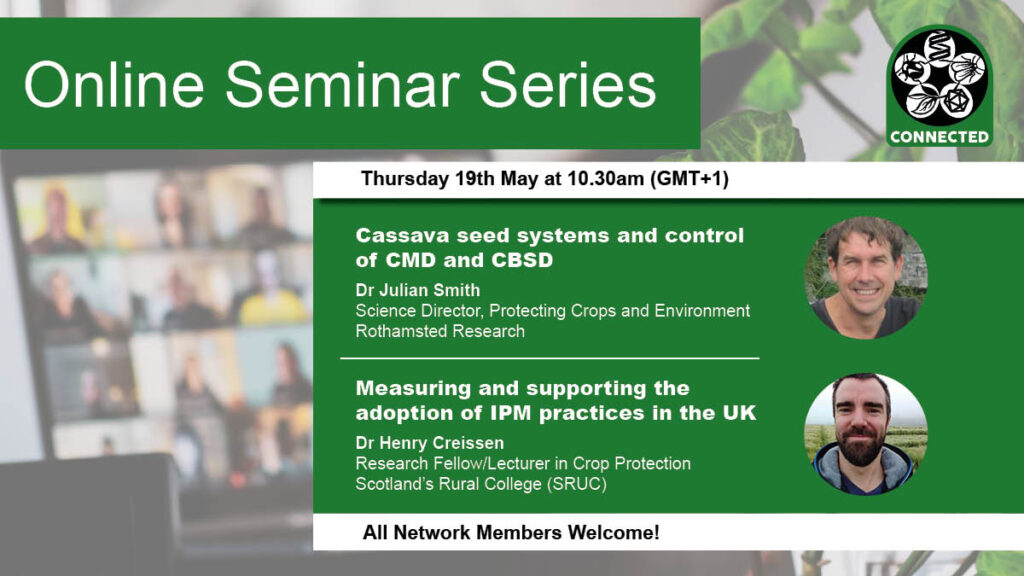 The CONNECTED Online Seminar Series is back!

We welcome two new speakers for a fascinating event, with talks as follows:

Cassava seed systems and control of CMD and CBSD

Dr Julian Smith is Science Director for Protecting Crops and Environment at Rothamsted Research. Building on a career in plant health and external affairs, Julian provides leadership on science strategy, alongside engagement with UK and overseas governments, academia, foundations and industry. Julian’s career has focused on plant pest risk assessment, biosecurity and capacity strengthening. He has worked on crops as varied as potato, banana, coconut and cassava in East Africa, South America and Asia.

In recent years he has provided expert advice on research and policy development for most of the recent major emerging pest outbreaks of East Africa, including Banana Xanthomonas wilt, Cassava brown streak disease and Maize lethal necrotic disease.

Measuring and supporting the adoption of IPM practices in the UK

Henry is an Applied Plant Pathologist and IPM expert with over a decade of experience in various farming systems. His current research focuses on developing effective integrated disease management strategies for arable crops, improving IPM approaches to arable farming, increasing farmer adoption of best practice, and quantifying adoption of IPM practices at farm level through stakeholder engagement and farmer surveys.  After completing his PhD in plant ecology and pathology at the John Innes Centre (UK) in 2013, Henry worked as a Crops Researcher for the Organic Research Centre (UK) where he was involved in large European projects on agricultural systems. In 2015, Henry moved to Teagasc (Ireland) where he worked to improve IPM approaches to arable farming and increase adoption of best practice at farm level. In 2017 he moved to Edinburgh (UK) to take up a lectureship position at Scotland’s Rural College (SRUC). He is a work package leader in Scottish government funded work on IPM where he’s building on strong links he has with various research institutes in the UK and Europe. He also has experience of conducting cropping systems research in West Africa (Sierra Leone, Guinea Bissau). In addition to his research commitments Henry leads several crop protection modules and contributes teaching to several degree programmes. He also regularly contributes to meetings of growers, agronomists and the agrochemical industry.

Each talk will be approximately 20 minutes, followed by time for questions. There will also be time at the end for networking.

To view the recording