Thangam Debbonaire MP, the Member of the UK Parliament representing Bristol West, visited CONNECTED Network Director, Prof. Gary Foster, to find out more about the global project, which is based in her constituency at The University of Bristol’s Life Sciences building.

The Labour MP joined Prof. Foster to view work in university laboratories, seeing first-hand some examples of the devastating impact that plant diseases has on food crops in Sub-Saharan African countries.

Plant diseases significantly limit the ability of many countries to produce sufficient staple and cash crops such as cassava, sweet potato, maize and yam. The CONNECTED project focuses on addressing their spread by vectors – insects that transmit a disease from one plant to another.

The impact of the diseases includes:
• Poverty, malnutrition and food insecurity, caused by the limited production of a range of food crops – cassava, sweet potato, maize and yam, for example.
• Economic and social development of the affected countries
• Migration – since insufficient food and crop-derived income can lead to people wanting to leave the country 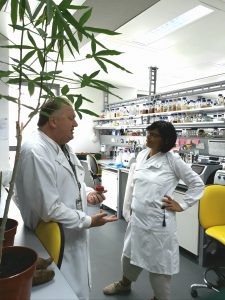 Thangam Debbonaire MP said: “From its Bristol base, the CONNECTED project is co-ordinating research work of global significance.

“With a growing global population and accelerating climate change, crop science is becoming ever more important. I was very pleased to see such cutting-edge work happening in my constituency.”

Prof. Foster added: “A number of scientific research projects have been undertaken in recent years in different parts of the world. There is a great deal of expertise in the field. It is vital to bring these experts together, creating more effective research communities.

“There needs to be a relentless focus on refining the most pressing research targets, and ensuring academic excellence has maximum impact on the ground. This is what CONNECTED is working to achieve.

“We are encouraging new collaborations between scientists from a range of institutions across the globe, developing training programmes and offering opportunities for pump-prime research funding. By developing a network of world-class scientists and researchers we aim to produce a pipeline of innovative disease-control strategies that will improve food security for years to come.”

The CONNECTED network project is funded by a £2 million grant from the UK government’s Global Challenges Research Fund, which supports research on global issues that affect developing countries. It is co-ordinated by Prof. Foster from the University of Bristol School of Biological Sciences, long recognised as world-leading in plant virology and vector-transmitted diseases. 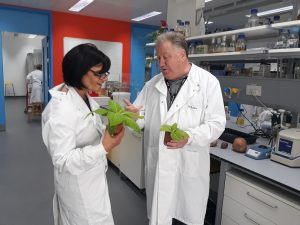 In the project’s first few months it has run two major international conferences: one in Bristol, UK, and one in Kampala, Uganda, drawing together scores of world-class researchers. Its growing network membership so far brings together hundreds of researchers from 34 countries.

Cassava: An example of how plant diseases devastate crops and livelihoods
• Cassava produces carbohydrate-rich roots, which are a staple food crop for some 800 million people worldwide
• It is Africa’s second most important food in terms of calories consumed
• Productivity in East and Central Africa is hugely constrained by two viral diseases: cassava mosaic disease and cassava brown streak disease
• Devastation caused by these two diseases is estimated to cause annual losses worth $1 billion.