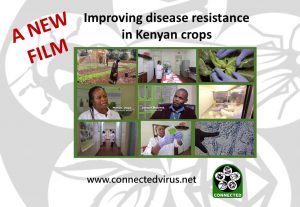 CONNECTED is pleased to publish a new short film explaining a research project funded by the network, which seeks to improve the resistance to disease of cabbage and kale crops in Kenya.

Cabbage is Kenya’s third most important and commonly consumed crop. It is Kenya’s most common vegetable. Generally the population of Kenya consume it on a daily basis.

One of the challenges in production systems in the country is the presence of Turnip Mosaic Virus, which is spread by aphids. They are capable of spreading it very quickly, which has led to a wide spread of the virus in Kenya, and hitting the production statistics of the country, and impacting on hunger as well.

When the infection of Turnip Mosaic Virus starts very early, the cabbage does not form the head, so the farmer loses the crop – almost 75 per cent. If the infection sets in late, the head will be formed but it will not be marketable.

Disease resistance has been identified in Chinese cabbage, a distant relative of Kenya cabbage. So the project is looking for a trait that has been developed in terms of resistance to this virus in a Chinese cabbage, with a view to transferring this desirable trait to Kenyan cabbages, and so increase production.

This project, ‘Improving disease resistance in Kenya’s crops’ is central to improving the livelihoods of farmers in Kenya, especially those engaging in kale, through reducing the cost of production. The film explores the project’s aims and the techniques being used. Watch it using this link.

The project is an international research collaboration, bringing together:

Key people involved in the project are: