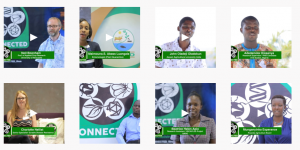 A series of new videos featuring several of our network members has been added the CONNECTED website resources area.

Filmed during the project’s Africa Launch Conference in Kampala, Uganda, in May 2018, the short interview clips feature some of the conference delegates giving their thoughts about a range of issues including:

• The CONNECTED network’s potential to help tackle vector-borne diseases in Sub-Saharan Africa
• The importance of the network in creating exciting new collaborations of researchers and scientists worldwide
• The emphasis the network is placing on supporting early-career researchers
• Its potential to draw in experts from a range of disciplines to make this a truly inter-disciplinary project
• Why anyone considering joining the network should do so – it’s quick, simple and free to do so.

You can watch the videos using this link, where you can also view others that were filmed during the UK Launch Conference (Bristol, UK, January 2018).