Julia Vaccina Makar and Kye Ottley are second year BA (Hons) Animation students at The University of The West of England (UWE). As part of the course, students have the opportunity to become involved in a ‘live brief’ – working with actual clients who require animated films for their own industry or project, and being renumerated for their creativity and hard work. The process involves students competitively pitching their ideas, and then closely liaising with the client throughout the production period.

Here Julia and Kye reflect on their experiences of making “The impact of human activity on plant health in Sub-Saharan Africa”. 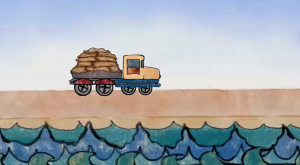 We were first introduced to the brief when Richard Wyatt and Diane Hird from CONNECTED pitched the film at our university, telling us about what the project does and how it helps people in Africa to overcome the serious risks of plant viruses on their crops. We both felt a strong motivation to be a part of this, and quickly teamed up afterwards.

We knew we both enjoyed working in an illustrative watercolour style which would work well together. Moreover, this brief felt special as it was from a cause actively making a difference in the world and, as it was about Africa, it had the potential for some bright and colourful artwork.

At this early stage we knew we needed to prove we were up to the task, so created a storyboard, an animatic and concept art ready to pitch. We were up against some other very talented students also hoping to get this brief, so we were quite nervous. But a week later we found out we had got the brief, and we were ecstatic. We had been wanting to work together for a while, and to be able to work on such a fun and important project together was very exciting.

We had decided on an illustrative painterly art style, and we both experimented with concept art to try and find the right balance of texture, colour and character. 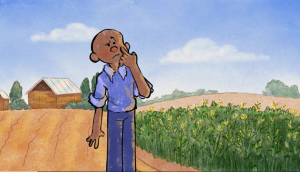 The animation had to have the same function as a picture book: a visual journey which is both instructive and engaging. We conducted research into illustration and considered various artists. For instance, Quentin Blake’s work helped us to develop a style that contained feeling and information.

The colours needed to be warm and vibrant so to recall the distinctive environments of Sub-Saharan African countries.

Members of the CONNECTED Network had been kind enough to share videos and pictures with us to use as reference material when we were designing and planning.

This showed us the fields, the crops, the insects, the laboratories and the people. In our first animatic the plants and insects had been given faces and characters, but to fit the tone of the film and to maintain accuracy we had to make many changes. It was quite tricky finding the balance between accuracy and appeal, especially with the insects, but we feel we managed it in the end.

We avoided animation frame-by-frame so not to make every scene too distracting. The audience might focus on the movement of the characters forgetting the message. Limited animation gave as much space and attention to the narrating voice as possible which was our first aim.

Since the main purpose of the film is to inform and entertain, the information shared and explained by the narrator needed to be as clear and straightforward as possible.

Working from home during COVID-19 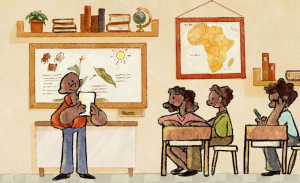 Working on the CONNECTED animation was a very positive experience. We received support from the Network and our tutors throughout all the stages of the production. Our tutors gave us creative freedom, useful advice and they encouraged us to explore and experiment while animating.

After our university campus was locked due to the COVID-19 emergency, they made sure we had access to all the equipment and software we needed to finish the animation. The good thing about digital animation is that it can be done remotely. Our tutors were incredibly supportive and gave us effective feedback for our work every week.

Animating this short-animated film was challenging and engaging. It was a gradual process where every stage had to be supervised and once it was approved, the next step could be taken. Making the film and seeing it coming to life was such an exciting experience.

We are so proud to have been involved in this project because we learned so much about the CONNECTED Network’s work. It was a big responsibility to represent visually how human activity can be one of the main causes of the spread of plant diseases

The Network makes sure to provide training and resources to farmers so that they can have a good understanding of the problem and how to face it successfully. The failure of crops is a huge issue that is not addressed with all the attention it deserves to receive. Maize crops are particularly important because no part of the plant is wasted. The husk, kernels and stalks can be used in a very resourceful way.

We really hope the animation not only will help the audience to understand the value of the work done by CONNECTED, but also how dangerous plant viruses are, with consequences that affect so many people’s lives. We all should be more aware of these problems and support the Network’s cause.