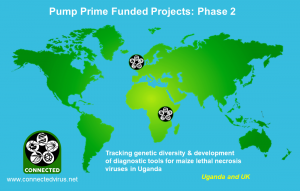 Maize is an important staple crop in East Africa. In Uganda, it is a key food security crop, and a source of income for smallholder farmers. Its yield in Uganda is significantly limited by maize lethal necrosis (MLN), which was first reported in Kenya in 2011, and has rapidly spread across Eastern Africa. In Uganda, it was initially reported in eastern border districts, but new cases have been reported in western and northern regions.

The many reports of different virus combinations associated with MLN depict a steadily changing situation. However, no studies have been conducted in Uganda’s major maize growing areas to understand the virus diversity associated with MLN, or interactions with the host.

This project aims to:

The project uses next-generation sequencing and bioinformatics to identify uncharacterised viruses that synergistically interact with maize chlorotic mottle virus (MCMV) to cause MLN, and assess genetic variation in MCMV and other viruses in Uganda.