Home > News and views > Young African scientists can make an impact: reflections on The 2019 Grand Challenges meeting
Back to News

Young African scientists can make an impact: reflections on The 2019 Grand Challenges meeting

Two African early career researchers who attended the Grand Challenges Annual Meeting in Ethiopia in late October 2019, have been reflecting on their experiences and learning from the event. Richard Wyatt, CONNECTED Communications Officer, caught up with them soon after their return from Addis Adaba 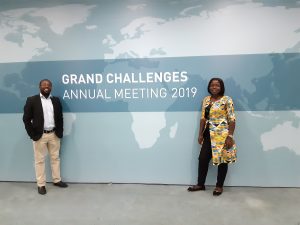 Sergine Ngatat, a Research Assistant at The International Institute of Tropical Agriculture, Cameroon, and Tendekai Mahlanza, a Researcher at The Plant Health and Protection Institute Agricultural Research Council, South Africa, were nominated to attend the event by their fellow delegates at June 2019’s CONNECTED V4 (Virus-Vector Vice-Versa) Development Programme at the University of Bristol, UK.

I ask for their initial thoughts about their experiences attending this major global event. “As an early career researcher,” says Sergine, “it was a privilege for me to attend the Grand Challenges meeting, and hear experiences from other researchers from different backgrounds and countries.

“It was a good experience to see and learn about some innovations, and some simple ways of bringing our research to the simplest level of understanding and use,” she continues.

Tendekai echoes the sentiments: “As a young scientist, it was indeed a privilege to interact with government Ministers, influential policymakers and renowned scientists to get their perspectives on different issues and learn from their various career experiences,” he says.

The pair reel off a list of the people they were able to meet at the event, and it’s an impressive roll-call: “Researchers from both medical and agricultural sciences; company representatives; prospective funders; potential research collaborators from Africa and the USA; and government Ministers and officials from across the world.”

Sergine is in no doubt about one of her personal highlights: “I was excited to know I was sitting in the hall where our Presidents, of African countries, used to sit for their meetings. Additionally, I was very happy and very excited to be listening directly to the Ethiopian President, a woman, speaking.” 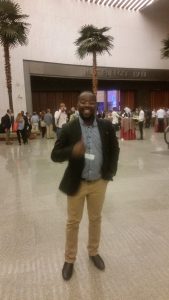 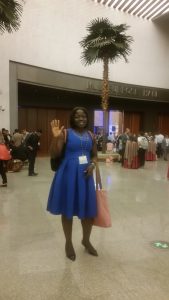 The experience has clearly given Sergine and Tendekai’s own professional profiles a huge boost, with an array of new contacts established. “The meeting is unique in that it gathers scientists, policymakers and funding organisations working towards the same ultimate goals,” says Tendekai. “As a result, we managed to connect with such individuals and look forward to continuing these relationships well beyond the meeting.”

Sergine understands that having established new connections, it’s important to maintain the momentum. “Since returning home, communications have already been exchanged with some of the contacts made at the event,” she assures me.

Both are acutely aware that sharing what they learned with others in the CONNECTED network will multiply its impact. Collaboration is at the core of the CONNECTED mission, after all.

So having been nominated to attend by other delegates at the V4 training course, it’s no surprise when Sergine explains: “The key contacts made at the event were shared within the CONNECTED V4 Group,” while Tendekai adds: “We kept the rest of the V4 members up to date with proceedings during the meeting.”

I ask Sergine and Tendekai to outline just a few things they learned, and they both stress how the event highlighted to them the importance of multi-disciplinarity, and the value of cross-cutting teams in tackling research challenges.

“Scientific research requires networking and connections,” offers Sergine. And Tendekai expands: “Innovative solutions to various problems the world faces can be invented if problems are viewed from different viewpoints in a collaborative effort.”

So if they had to name just one key piece of learning, one ‘takeaway’ from the event, what would it be?

Sergine succinctly sums up her thoughts: “Our science should be useful to solve our everyday challenges,” she says.